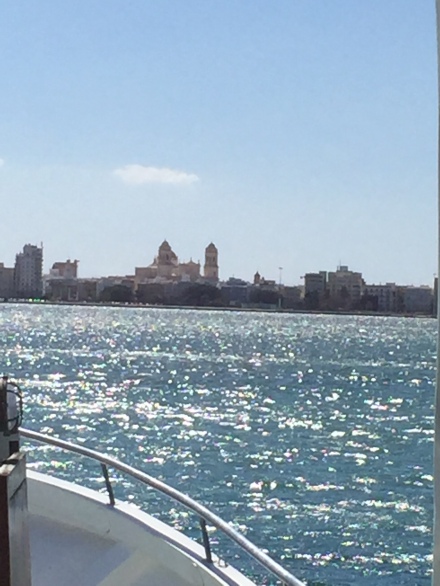 Two months later and I’m writing my final installment about this trip! Well, I’ve been thorough, you have to give me that!

I will be back with some news (what to do with a constipated cat, how about that topic?) and some wardrobe news, but first I want to share the last two days of my trip to Andalucia and the places I saw – Cadiz and Ronda.

By the time the bus trip got on its merry way to Cadiz I had become sick and I’m pretty surest was the air conditioner in Granada that brought it on. But never the less it made the two last days of the trip feel kind of blurry, coughing and coughing…

That was too bad, as both Cadiz and Ronda was enormously pretty places, and I hope I will some day get a chance to visit them again.

I met Cadiz from the water, and that is the way I recommend. The beautiful golden roof of the old mosque, the whitewashed houses and of course the blue sea and sky – it couldn’t be more beautiful!

But first we had a great luncheon in the small town of St Luisa and visited a sherry distillery. You do know of course that I don’t drink very often anymore so I just smelled and sipped, but it was an interesting experience and the food was amazing. The best of the whole week! 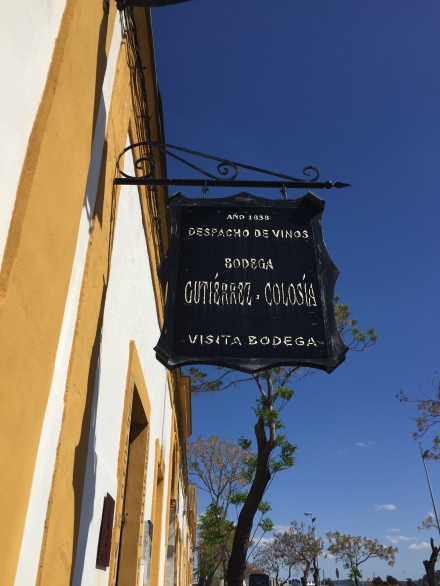 This was the bodega we visited, the restaurant was close by on the same street. The most interesting part, to me, was that the family traditions was now carried on by the young granddaughter of the founder, and the restaurant had a fresh young vibe as well. It was really nice too see that traditional methods and products can be re-invented and carried on.

Because of the great food and drink we almost missed the ferry, but they grudgingly let us 19 geriatrics on board for the 30 minute trip over to Cadiz. The benefit of being old, you can get away with being late…

The jerez (sherry) took its toll, so we only had a rather short stroll through the city before we were brought to the hotel. This was my view.

Beach and water, and later on the most amazing sunset! Our guide invited us out on a terrace to watch it with yet another glass of sherry, and it was beautiful. Too bad, my cough was getting worse.

The last actual day of the trip was a long bus ride to Ronda. Mile after mile of  olive trees and hills. 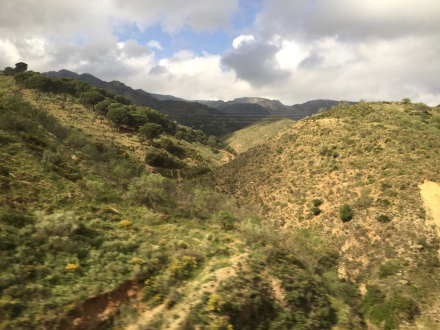 A week of early mornings and my cough didn’t find me appreciating Ronda as much as I should, perhaps. But this town with memories of Ernest Hemingway, Orson Welles and filled with American tourist does have a striking location.

And we were also taken to the bull fighting arena for a tour.

I have to be honest. No one will be able to persuade me that bull fighting is beautiful, to me it is torture and just as I never accepted fox hunting when I visited UK, I do not accept that it is “culture” or “tradition”. If that is the case, what is the difference to female mutilation that some countries practice? There are simply traditions that should be abolished, and this is one.

But that said the arena itself was very beautiful and interesting.

And so we finally visited a small private house with a museum. I must say, these views from the garden was to die for, and I wouldn’t have minded a terrace like that, either.

So my conclusion from this 7-day trip? Traveling with bus, changing hotels most every night and having early mornings didn’t quite make this a “holiday”. But if I had travelled on my own I wouldn’t have seen half as much, so it filled a purpose.

Would I do it again? In a heartbeat, but not twice. Now I know where to go back, and that was an important part of my goal with this trip.

Would I travel on a bus-trip like this again somewhere else? I’m not sure. Being a single traveller I got a few really bad rooms, and so I got sick. Package deals are like that, no matter how much you pay extra for having your own room. On the other hand there are places I may not want to travel solo, and I was impressed by my guide and had great fun with my companions, making some really good friends. So, I guess the jury is out on this one, but never say never.

Join 56 other followers
Gypsy on a qwerty keyboard

A Typical Blog. A Typical Woman. A Typical Take On Life. With An Atypical Twist!

The Art and Craft of Blogging

The latest news on WordPress.com and the WordPress community.