I´m in Visby, a small town on the island of Gotland on the east coast of Sweden for a festival. Crimetime is a festival for booklovers, and of course especially crime-literature.

I noticed at the airport that most of those crime-lovers are middle-aged or even elderly ladies (think miss Marple) and already on the plane I got into conversation with a lady who was planning her Primetime-experience the same way I have done the last week, with a program and a pen…

The festival doesn’t start until tomorrow, so I will be back about that,

But today I checked into my hotel and then spent a few hours walking around Visby, which is such a pretty town. I was here in the beginning of July for Almedalen (a public political week and a bit of an institution in Sweden), but that was for work and the streets were over-crowded.

Now they are empty more or less, summer is almost over, but there is a calm and a soft autumnly beauty to the place, that I just adore. The weather was windy but sunny, so with a jacket on I could still have an al fresco lunch and later a coffee. 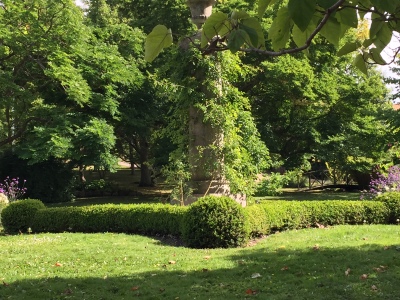 Visby is an old medieval town, the walls surrounding it are on UNESCOs World Heritage List, and there are more ruins of mediaval churches than I care to remember. But they are beautiful, and the small cobbled streets are so pretty, it´s hard to imagine this is the Midsomer of Sweden (for those who don´t understand google Midsomer Murders). Quite a few mystery writers have placed their books in this idyllic setting, but as far as I know it is pretty peaceful in reality. Apart from the so called Stockholm-week in July when the rich brats from the city come here and get drunk and party for a full week (some sort of twisted tradition that I´m not sure when it started or why), and the locals escape to their summer cottages outside Visby. I guess the brats don´t dare to walk into unknown territory, that is outside the Wall, or maybe there just are no bars out there…

Anyway, I´m staying for 4 nights or 5 days so I´ll have loads of time on my hands to explore. Today I walked along the waterline and to the Botanical Garden and had coffee at Bredablick, a hotel and well-known cafe, before walking back to my hotel. I´m not sure I want to leave my room, though, because I have a big room with a huge bed and a sofa with views over the sea! So happy with it! 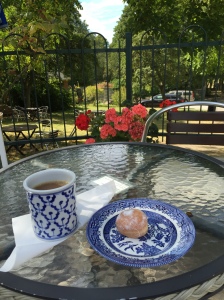 Join 56 other followers
Gypsy on a qwerty keyboard

A Typical Blog. A Typical Woman. A Typical Take On Life. With An Atypical Twist!

The Art and Craft of Blogging

The latest news on WordPress.com and the WordPress community.